The Grand Egyptian Museum (GEM) is located west of Cairo near Giza pyramids. The selected location for this mega project is a witness to the greatness of Egypt in the past, present, and future. The museum is mainly designed to be the largest archeological museum in the world. Its area is about 117 feddans (500.000 sq. m.). It houses more than 100.000 artifacts belonging to both Pharaonic and Greco-Roman periods. It's expected to be visited by more than 5 million visitors annually.

The museum will include a number of commercial and entertainment service buildings, a conservation and restoration center and a museum garden planting the trees that the ancient Egyptian used to know. The project will be carried out in three major phases at a cost of $ 550 million. 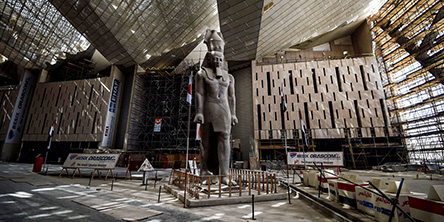 During 2010, the second phase (Phase II) of the project was inaugurated which included a Conservation Center (CC) consisting of a number of tests and analyses labs such as Scanning Electron Microscope & Microbiology labs, in addition to Mummies & Human remains lab, Stone lab, Wood lab, and Ceramics, Glass and Metal labs.

The third Phase (Phase III) of the project includes the construction of the museum's main exhibition hall which will display 100.000 ancient Egyptian artifacts, Schoolers museum, a Conference Center, an Archeological Library and the Child museum. The final inauguration of the project will be on Nov.2022.

A visitor's tour inside the museum begins with a view of Obelisk Square where the first hanging obelisk in the world is displayed. The visitor will see the majestic façade of the museum "The Pyramid Wall" is 45 meters high and 600 m. wide. Inside the museum's building stands the statue of Ramses II welcoming the visitors. The building contains a number of halls such as King Tutankhamen Hall housing the treasures of the king displayed for the first time to the public, a library of rare books, antiques stores, a conference building containing a 3D auditorium, a cultural center, a commercial walkway, restaurants, cafes, and shops. The outer spaces include Sun Boat museum, many restaurants, and large gardens for everyone to enjoy. 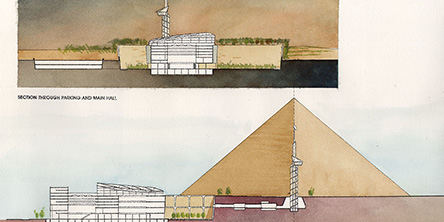 The Grand Egyptian Museum is located in  a prestigious site near the pyramids of Giza. The philosophy of design is to connect the axes of the museum building with the axes of the neighboring pyramids. Thus, the contemporary design of the museum is intended to show ancient and modern Egypt in one scene.

One of the main design features includes what we call "stilettos"- massive downward pointing structures along the grand stairs. There are two rows, one on each side of the travellators that go up and down, for those who don't want to or can't use, the main stairs.

The design incorporates a series of layers, where visitors can move through a forecourt, a shaded entrance hall, where the statue of King Ramses II stands and a grand staircase that ascends to the plateau level where the galleries are located and visitors can see the pyramids from inside the museum. This is the design concept that really integrates the museum with the pyramids as if the designer wanted to end the museum trip with this dazzling scene of the pyramids after the end of a historical display of the civilization of ancient Egypt.

The folded roof structure, another key component of the architectural design, is another feature of the building with its rectangular panels spread across all parts of the roof and its underside. The downward sloping rectangles of the roof represent an aesthetic element of the project as they allow natural light to the main foyer of the museum. 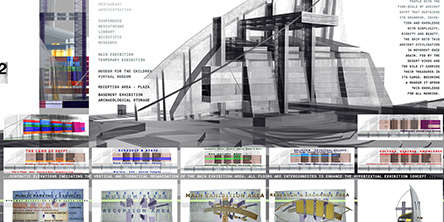 This modern building was built on the basis of BIM (Building Information Modeling) technology. It's the latest method of coding and classifying products for easy access.

Finally, the Italian Goppion company recently took the contract to design a high-tech display case for the museum. It's a great company in this field known for designing the first display case for Leonardo Da Vinci's works in Louvre museum in Paris.