With investments of one trillion EGP, Egypt is making a miracle in the transportation sector.

The Prime Minister of Egypt, Dr. Mostafa Madbouly, described the transportation network in Egypt as a "development vessel", reviewing the country's achievements in the file of transportation networks development and modernization over the past six years, explaining that Egypt was ranked the 118th in the world in the road quality index. Through years of work and development, it has ranked up 90 places, and is now the 28th in the world.

The state announced that the goal this time of developing the national road network and the transportation sector in general is not only to reduce densities within cities, but Egypt is preparing for a more ambitious plan that transfers development from eastern to western Egypt, to serve the national urban development plan for Egypt until the year of 2052, which aims to double The urban area of Egypt, a plan that needed vessels for development, as described by the Prime Minister 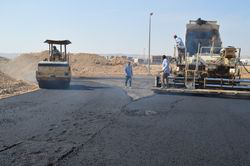 Egypt exceeded the implementation rates in a record, so what was scheduled to be completed in the year of 2027 as the first stage of the road development plan until the year of 2052, is about to be completed a few years after the beginning of implementation, and the state was actually able to plan and implement 7 thousand kilometers of new or upgraded roads, and the total of investments that are being implemented on the ground are 950 Billion EGP (Almost one trillion EGP), of which the state has already spent 424 EGP, with 526 Billion EGP to be spent within the next three years.

The other projects that one trillion EGP will be spent on are no longer only plans. In the field of road development, work is underway on the Middle Ring Road, to link Belbeis and the Ismailia Desert Road at a cost of 3.6 Billion EGP, in addition to the “Farafra/Dayrout” axis, at a cost of 1.7 Billion EGP, which reaches deep into the Western Desert. And the Western Assiut Plateau road, which connects Assiut to the new city of Nasser, and the Cairo Suez Desert Road and the axes of the New Administrative Capital that are being developed, not to mention the huge network of tunnels that has been implemented by Egypt

Talking about railway projects will not stop, because of the great achievement that Egypt has achieved in this file. Egypt has a long history in this field, by introducing the railways in the year of 1851 by establishing the Cairo-Alexandria line, and in 1858 the work of the Cairo-Suez line was completed, but with the passing years, the sector became obsolete and did not cover operations and maintenance costs, until Egypt decided to put an end to this situation.

This number, which the state aims to attract to the railway sector, needs real reforms of this ancient facility, among those projects that it will promote, the signal development project, which will reduce accidents as it can fully control this matter, after the control becomes completely electronic without any intervention of the human workers in the signaling system, which is a project that costs 9.8 Billion EGP, out of a total of 46.8 Billion EGP, with planned railway projects completing in 2024.

As for the stations, upgrading 174 stations has been completed, and work is underway to upgrade 7 more stations in small towns and villages, the most important of which are Misr Station in Cairo, Port Said Station, Misr Station in Alexandria and Bashteel Station, which contribute to solving the traffic density problem in Ramses Square - Cairo, By moving of Upper Egypt trains’ station to it (Bashteel Station), the state also made great efforts to develop tractors and passenger rail cars and pays attention to the transportation of goods by trains.

The Light Railway Train (LRT) electric train, which extends from El-Salam City to the tenth of Ramadan to the New Administrative Capital, is another boom in the field of transportation in Egypt, with a length of 90 Kilometers and carrying capacity of 500 thousand passengers per day, with 16 stations.

All of these projects were the reason for improvement in the quality of roads, thus reducing the road bleeding that Egypt has suffered from for years, represented by road accidents and the loss of hundreds of lives, so that the death rate from road accidents was decreased by 48%, reduction in the size of injuries by 47%, and accidents in road networks reduced by 36%.

In Africa, Egypt has become the second country in terms of road quality, after it was ranked 28th, and Egypt's indicators are still improving, as it introduces many of its national projects in the field of roads and transportation in general.